St. Patrick’s Day ~ The Story Behind the Holiday

In Irish – Lá Fhéile Pádraig – the Day of the Festival of Patrick – is celebrated on the death date of the foremost patron saint of Ireland March 17.

The myth of St. Patrick ridding Ireland of its snakes comes from his efforts to convert the druids to Christianity – Ireland never had any snakes!

The Irish have celebrated this for over 1000 years! The famous day, which falls during the Christian season of Lent, Irish families would traditionally attend church in the morning and celebrate in the afternoon. Lenten prohibitions against the consumption of meat were waived and people would dance, drink and feast–on the traditional meal of Irish bacon and cabbage.

St. Patrick, lived during the fifth century, and is the patron saint and national apostle of Ireland. He was born in Roman Britain; at age 16 he was kidnapped and brought to Ireland as a slave. It said that he spent six years there working as a shepherd and that during this time he “found God.” The Declaration says that God told Patrick to flee to the coast, where a ship would be waiting to take him home. After making his way home, Patrick went on to become a priest.  According to tradition, Patrick returned to Ireland to convert the pagan Irish to Christianity.

He eventually escaped, but returned to Ireland and was credited with bringing Christianity to its people. In the centuries after Patrick’s death, the mythology surrounding his life became ever more ingrained in the Irish culture: possibly the most well known legend is that he explained the Holy Trinity (Father, Son and Holy Spirit) using the three leaves of a native Irish clover, the shamrock.

Did you know that the first parade honoring the Saint was not in Ireland but in the United States? Irish soldiers serving in the English military marched through New York City. The parade, music and more helped the soldiers reconnect with their Irish roots, as well as with fellow Irishmen serving in the English army. From there, over the years, the celebrations and festival grew exponentially, especially in the US & Canada with our Irish immigrants. You know the saying “the farther from Ireland – the more Irish you are!”

So from El Portal Sedona Hotel – we wish you a Happy St. Paddy’s Day! 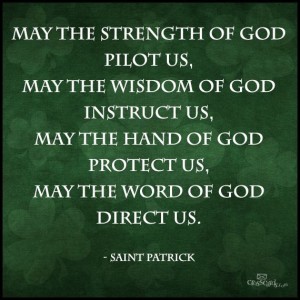