Steve and Connie have just added this beautiful Irvin Burkee sculpture to the art collection at El Portal Sedona Hotel! The original work of art was carved in Statutory white marble from the quarry at Marble Colorado, in his studio in Aspen Colorado in 1973 – 1974. This state one edition #1/10 AP was cast in 2003 at the Artscape Foundry here in Sedona, under the supervision of the artist. Each sculpture bears the signature of the artist and the edition number.  Known as The Boy and His Dog, it depicts the love this boy has for his dog and the love the dog has for his boy. 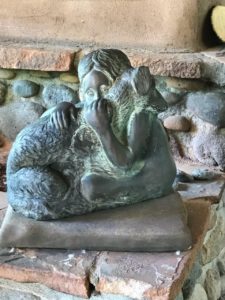 Irvin Burkee was born on February 6, 1918, in Kenosha Wisconsin. He studied for six years at the School of the Art Institute of Chicago with Boris Anisfeld, the great Russian Master. After completing his education at the Art Institute of Chicago he married Bonnie May Ness, who was a fellow student. Eventually, he became a faculty member of the Art Department of the University of Colorado and later to Art Department of Stephens College, all the while continuing to paint. Withdrawing from teaching to pursue the arts in his studio, his first venture and founded the Burkee Jewelry Studio with Bonnie in Blackhawk Colorado. Later, upon moving to Aspen, Colorado he began working in many media: painting, sculpting in bronze, and marble. He maintained a studio and a downtown gallery with Bonnie. His audience was national and international, and his primary focus was paintings. He also created sculpture, wall murals, and architectural work for private residences and public spaces. His large metal panels are installed in the Aspen Center for Environmental Studies in Aspen Colorado, and his large metal mural of the History of Colorado is in the collection of the Colorado Historical Society.

In 1978 he and Bonnie established their studio in the Verde Valley Arizona and he continued to create, showing in galleries in Sedona and Scottsdale Arizona, Monterey California, and New Jersey, until he passed in 2007. As for awards and appointments, he received a Smithsonian award for his silversmithing and was appointed a member of the National Sculpture Society of New York. 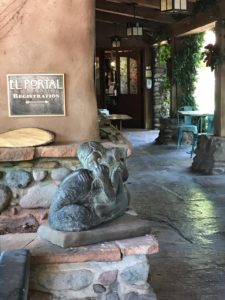